Looking for the perfect Moroccan holiday from Tangier to Marrakesh? Well then you’ve come to the right place! Here at Women Best Travel  we offer unique and authentic experiences that allow you to truly get a feel for this culturally and geographically diverse country. From Tangier to the Blue Town, to the Atlas Mountains, the Sahara Desert and the ancient imperial cities of Fez and Marrakesh, to guided day excursions of Marrakech, our customised experiences from Tangier to Marrakech 7 days Trip will have you stepping into the lives of locals and getting acquainted with the food, culture and traditions of this fascinating country.

DAY 1: MEET AT TANGIER OR FINDEK AND DRIVE TO CHEFCHAOUEN

we will pick you up from  the Airport/ Port and start  driving through  the  rif mountains and Tetouan city  to Chfchaouen (the blue city) Its buildings and houses are all painted in blue and white and it is one of the most beautiful towns in the Rif mountains, we will start exploring this beautiful blue town situated in the rif mountains south of the Mediterranean coastline in northwest Morocco. First we will visit the kasbah of chefchaouen, small but charming back to between the 15th and 16th centuries AD and we continue exploring the city, in the evening you can enjoy a nice moroccan food in a Riad..Overnight in your Riad/Hotel. 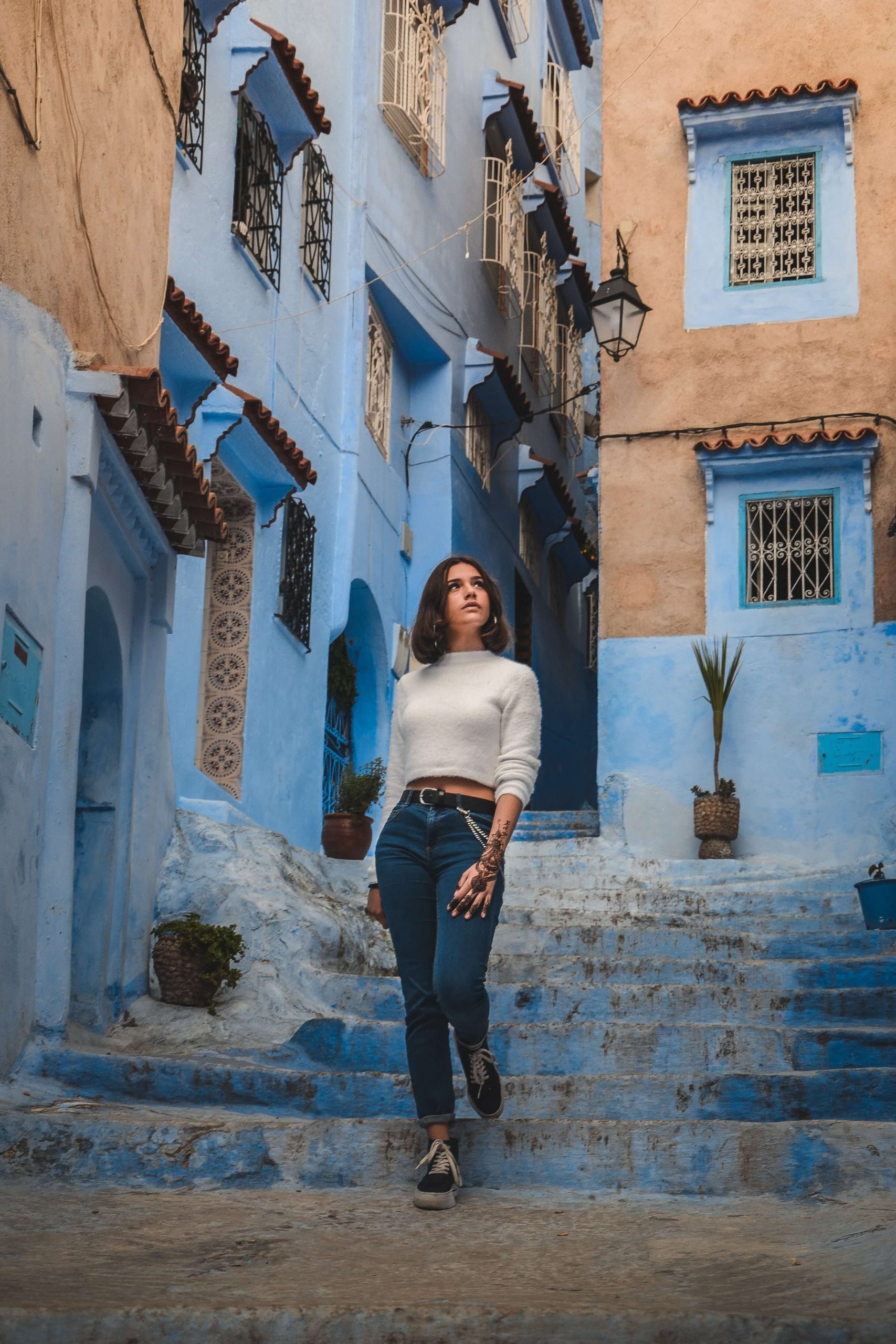 Next stop will be The world heritage site VOLUBILIS. Established before the Christian Era, at a time when the area was part of Mauretania, Volubilis was considered the administrative center of the kingdom of Mauretania and also one of the most remote cities within the Roman Empire, located in the far southwestern region, then we continue to the holly town of Moulay Idriss Zerhoune that give a great into traditional moroccan life and arriving by evening to Fez where you will spend the night in a nice authentic riad.

After breakfast you will have a sightseeing tour where you can Walk through high walled streets, watch the daily procession of mourners entering the tomb of Fez’s founder Moulay Idriss II. the medina of Fez is Founded in the 9th century and home to the oldest university in the world what makes it the spiritual and cultural heart of Morocco. Spend the day exploring the old city, visiting, Mederassa Bou Inania, the tanneries and the splendid Funduk Nejjarine, a beautifully restored 18th century inn. return to your hotel to spend the night and enjoy a delicious moroccan dinner.

the tour statrt early in the morning around 8 am your guide pick you up from your Riad/Hotel and start a long driving day across the high atlas mountains leaving the old city of fes In the way we will pass through the most modern and clean city in the country Ifran. This Berber name of Ifran means caves and it is nicknamed in Morocco as a little Switzerland since it is a very green town and is a ski resort in the Middle Atlas region of Morocco because of its high altitude at 1665 meters. After we will stop in ziz valley To the south, the valley present a spectacular sight: a dense canopy of palms wedged between ancient striated cliffs, which date to the Jurassic period. We will encounter the oued (River) ziz, its source is located in the middle atlas region and continues all the way to the sahara to reach Algeria, alongside the river is surrounded by a stunning 125km belt of green palmeries.

We arrive to Erfoud the capital of Fossils in Morocco  It was built by the French in the 1930’s as an administrative center. It is a quiet place characterized by its red buildings and gorgeous scenery. well known for its  wood-fired madfouna (Berber ‘pizza’), during our stop  you will have the chance to visit one of the factories where they make beautiful articles out of marble, right after we will drive to Erg Chebbi, time for a cup of tea and packing for desert camp. Meet up with Camels for camel-ride and head to the dunes to watch the sunset .Overnight in the Berber tent in the middle of the most spectacular dunes of morocco, Highest dunes, spend 1 night the friendly berbers enjoy their music, dance around the fire… dinner in the camp.

your guide will wake you up to witness  the most magical sunrise from the highest golden  dunes, chance to see some wildlife. Time for breakfast and shower, last chance to enjoy the dunes, we set off to Rissani where we will  visit the mausoleum of Moulay Ali Chrif the founder of the actual Alaouite dynasty of Morocco at 17th century. Then we drive to the most spectacular gorge of Morocco, Todra gorge, enjoy a walk with your guide to explore the irrigation system and traditional farming gardens, a visit to a berber family to learn about carpet, recommended, to knock your socks off, after the berber family co-operative, showing their goods and carepets, great place to shop from mohamed’s family ( situated in the other side of the river near the mosque ) great place to buy genuine berber carpets and souvenirs, then you walk to the gorge, drive back to your hotel in the Tinghir.

After having breakfast we will go along the famous road of 1000 kasbahs, driving through The Dades Valley where will visit the Dades gorge & valley,we will have a berber lunch and explore the main features are the mud brick Kasbahs especially the Kasbah of Ameridil, a well-preserved Kasbah in this area. Then we continue to the rose valley with known for its apricots , but especially for its roses , this valley is rich of its traditions and its Berber culture , its splendid landscapes and its inhabitants . Getting to ouarzazate famous for the gateway of the Sahara Desert and Its huge Taourirt Kasbah, home to a 19th-century palace. Ouarzazate is hollywood of Africa as many international film companies came to shoot their movies in its studios and landscapes like: Lawrence of Arabia (1962), The Living Daylights (1987), The Last Temptation of Christ (1988), The Mummy (1999), Gladiator (2000), Kingdom of Heaven (2005), Martin Scorsese’s Kundun (1997) and Babel (2005), “Game of Thrones”(2012).

Aït Benhaddou Kasbah has been a UNESCO World Heritage Site since 1987,this Unesco-protected red mudbrick ksar (fortified vilage) built in the 11th centuryand used to be  a strategic stop for caravans of camels, , often numbering hundreds, on the trans-Saharan trade route from the Sudan to Marrakech carrying gold, silver and slaves and returning with salt,Afterword we will  head to Marrakech via the tizin’tichka pass .we’ll stop to visit the town of Telouet and its ancient 17th century Kasbah then we’ll continue exploring the tIzin’tichka road especially its great landscape of Berber’s villages, then we head north to Ouarzazate after crossing the  Anti-Atlas Mountains, continue to Marrakech by Tizi n Tichka pass. Overnight in Marrakech after a long day drive.

Welcome to Marrakech or “the red city ” situated near the foothills of the snow-capped Atlas Mountain, In Marrakech Europe, Africa and the Middle East mingle and merge as t is two parts one is the old town called “medina” where you will visit with your local guide the interesting monuments of the city like the “koutoubia mosque”,”the bahia palace” and the famous square Jama lfna.The other part is the new modern town “gueliz” built during the French occupation.