The El Bahia Palace (meaning brilliance in Arabic) in Marrakech indicates former glories once enjoyed by royal courts. Built between 1866 and 1867 by Si Moussa, rich and powerful Chamberlain (right arm of the Sultan) then Grand Vizir (literally head of government) of Hassan I, the Sultan Alaouite of Morocco (1836 – 1894), built a large Riad and its central garden, as well as a large courtyard with its outbuildings, such as stables, in the north-west part of the present Bahia palace. His intention was to build the greatest palace of its time, a lofty goal that only began to come close to fruition when his son took control of the palace in 1894.

The materials used are at the height of the Vizirs status: Marble, earthenware – zelliges, cedarwood, and it is called upon the best craftsmen of the kingdom: Marble, Plasterers, Carpenters… The palace is located in the medina, a few steps from the present royal palace, former palace of the Sultan, as well as the Badii Palace and the gardens of the Agdal.

Si Moussa’s son, Ahmed ben Moussa (also known as Ba Ahmed), was even more powerful than his father, serving as Grand Vizier and as regent of Morocco during the reign of the child Sultan Abd al-Aziz. He expanded upon the existing palace, bringing in the renowned architect Mohammed al-Makki and some of the finest craftsmen in the country to create the palace we see today. He also built rooms to house his four wives and 24 concubines.

Following Bou Ahmed’s death in 1900, it is said that the palace was ransacked and all valuables were removed. With the arrival of the French in the early 1900s, the residents were forced to move out to make way for the Resident governor of French protectorate Morocco, who attracted a number of illustrious guests, among them the writer Edith Wharton. She described the palace this way: “They came, they built the Bahia, and it remains the loveliest and most fantastic of Moroccan palaces. Court within court, garden beyond garden, reception halls, private apartments, slaves’ quarters, sunny prophets’ chambers on the roofs, and baths in vaulted crypts, the labyrinth of passages and rooms stretches away over several acres of ground.”

Not to be missed

in my opinion the Bahia Palace is one of the best attractions in Marrakech. It is a superb place  in which it needs to linger a  long time before counting your visit of interests centers in Marrakech.

More interesting with a guide

Given that the palace is completely empty and there is very little information in English you may want to hire a guide who will not only ensure that you don’t get lost but give you fascinating snippets of information to make your tour of this popular attraction in Marrakech even more worthwhile. we recommend booking a guided tour so that you can make the most of your visit.

The Visit of Bahia Palace in Marrakech

There’s no symmetry or planning to Bahia Palace because of its haphazard construction over so many years as more land became available. Elegant rooms open onto courtyards or gardens that then have more doors into narrow passageways leading to private areas.

In total, the palace compound is about eight hectares in size and has about 150 rooms. Only some of it is open to the public but it’s enough to see some of the best examples of the art and interior design – at least, those that weren’t stolen by the sultan when he raided the palace upon the death of Ahmed Ba.

The oldest part, it consists of a vast interior garden, overlooking 2 niches and 2 large rooms. The refined decoration honours Moroccan earthenware – zelliges as well as carved and painted plasters. The ceilings are made of cedar wood with painted patterns. 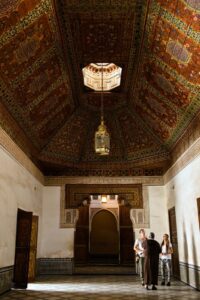 As most of the Arabic palaces, enlarged little by little without overall plan, the distribution of the courtyards, the gardens and the apartments are rather haphazard. 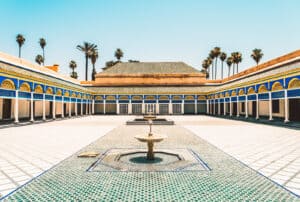 the small riad surrounding private gardens (of which visitors today pass through immediately upon entering the palace area) and each of the rooms decorated in truly elegant Moroccan style – carved stucco and cedarwood to decorate each of the rooms. 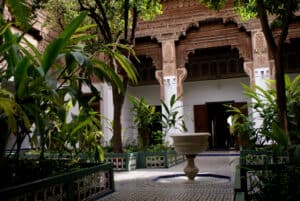 The small court was used by Ba Hmed as one of its private residence. The rooms were for his legitimate wives, particularly la Bahia. 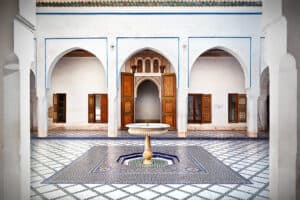 From Jemaa el-Fnaa, take the street Rue Riad Zitoun el Jdid (on the corner of the restaurant Marrakchi). You’ll find the palace ahead of you.

Explore the Souks of Marrakech (734 m)