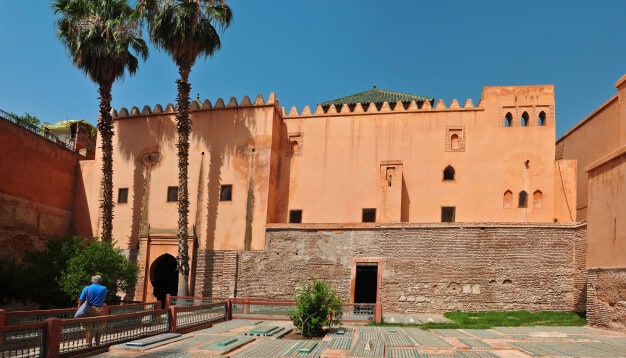 The Saadian tombs are located in the Almohad Kasbah district, near Bab Agnaou, and the famous  Kasbah Mosque known also as the Mansouria Mosque or Mosque of Moulay al-Yazid, is one of the most important historical mosques in Marrakech, the city was the capital during the Saadian era. This admirable funerary complex that house the remains of important figures from the Saadi Dynasty, which ruled Morocco from 1549 to 1659, is a must-see attraction for travelers visiting the red city.

The royal necropolis was used from the beginning of the 14th century, and Sultan Abdallah Al Ghalib was the one to build the first heart of the royal tombs to house his father, Muhammad Shaykh the founder of the dynasty, murdered in 1557.

A major expansion has been done under Sultan Ahmad al-Mansur (the victorious)  the sixth and most famous Sultan of the Saadi Dynasty, he imported  Italian Carrara marble and gilding honeycomb muqarnas (decorative plasterwork) with pure gold to make the Chamber of 12 Pillars a suitably glorious mausoleum that was his tomb after his death. Ahmad al-Mansour reign was a time of growth for the Moroccan capital Marrakech with the ransom paid by Portugal to recover the thousands of Portuguese prisoners captured during the battle of the 3 kings, the gold from Sudan, which was conquered in 1590,  in addition to the sugar cane trade in the Marrakech region. His nickname Al Dehbi (The golden one) represents the wealth and fortune of its era.

Moulay Ismael and the end of the Saadian Tombs 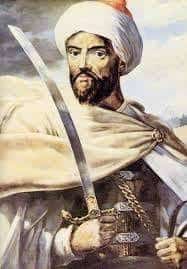 When the Saadian dynasty fell, Moulay Ismail was the second ruler of the Alaouite dynasty (1672–1727).his reign marked a high watermark for Moroccan power. He fought the Ottoman Turks in 1679, 1682, and 1695/96. After these battles, Moroccan independence was recognized.

Moulay Ismael was known for being Bloodthirsty, for his legendary cruelty, and Like many other rulers, after assuming power began to get rid of the legacies of his predecessors, He had the Badi Palace destroyed, but fortunately, he could not bring himself as far as to demolish a place of burial. Instead, he decided to seal all the entrances to the Saadian Tombs in Marrakech and had the entire burial ground walled into a small hidden passageway. The Saadian Tombs lay forgotten for over 200 years from the city’s memory.

rediscovery of the tombs

The tombs were forgotten and became only home to stray cats and storks from the nearby El Badi palace. Until 1917 when the French General Resident Hubert Lyautey commissioned aerial photographs of Marrakech, and rediscover the tombs, their cultural and historical value was recognized, and after a project of restoration, they were open to the public.

The principal and larger mausoleum located to the left while entering the complex. It’s divided into three interconnecting rooms: the Mihrab Room, the Room of the Twelve Pillars room, and the Room of the Three Niches room. Built by Ahmad Al Mansour and  It is believed to date entirely from his reign, though it contains many tombs from after his time as well.

Chamber of the Mihrab

The first room of the mausoleum, The chamber of Mihrab, was originally just a prayer room, but now has a large number of tombs in it, marked by zellij tiles on the floor. It has the mihrab ‘a niche or alcove symbolizing the qibla (the direction of prayer Mecca)’

The Mihrab room is opened by oratory and divided by four grey marble columns and has  Moulay Yazid tomb. He wasn’t a Saadian, but a sultan from the later Alaouite dynasty who was shot in the head in battle and buried here in the hope of being forgotten.

Chamber of the Twelve Columns (Mausoleum of Ahmad al-Mansur) 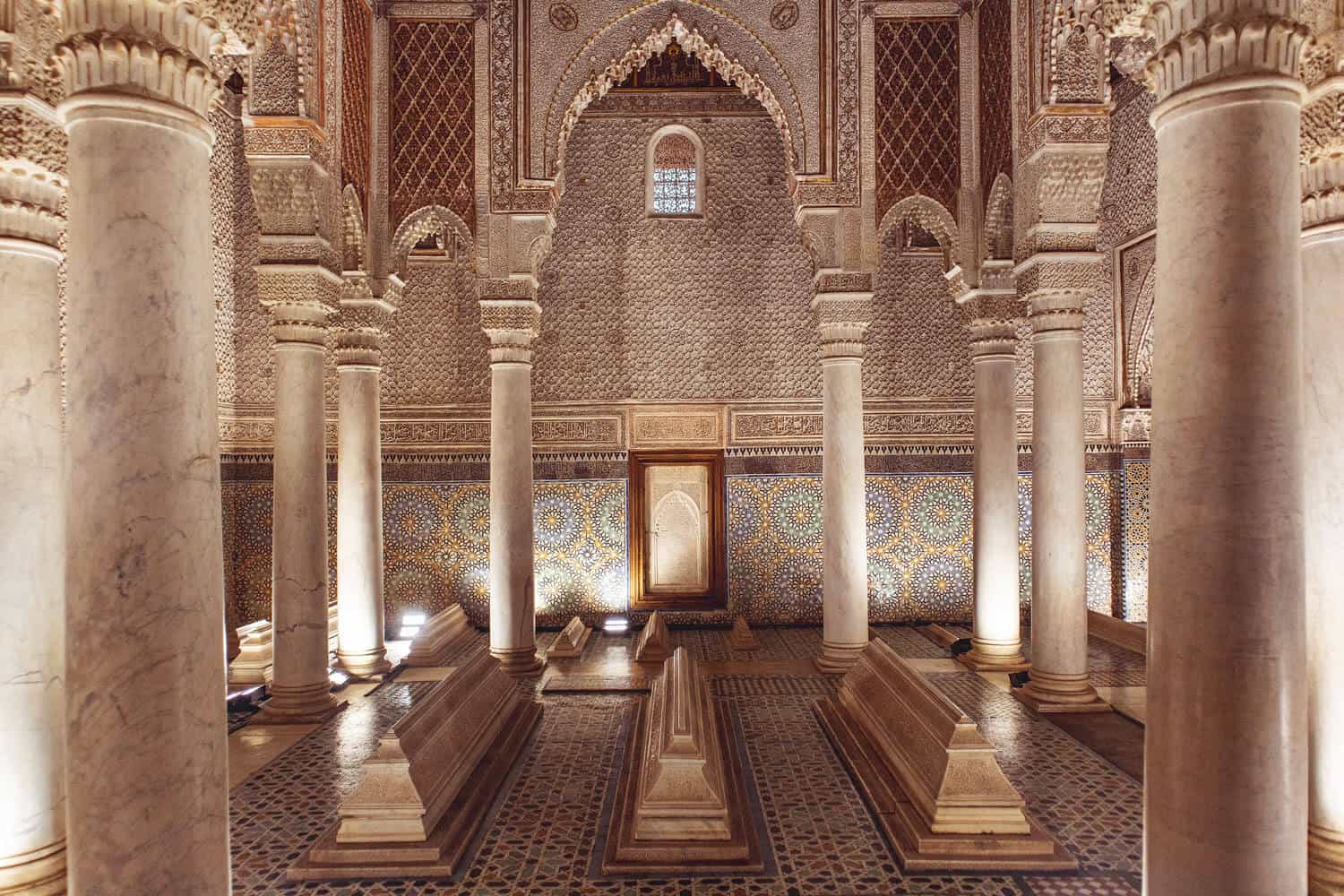 chamber of Ahmad al-Mansur and The most significant chamber in the tombs, The central room contains the remains of Ahmed el Mansour. His grave is surrounded by that of his son Zidane and grandson Mohammed. This room, known as the 12 columns, is richly decorated: columns in Carrara marble, decorated cedar ceiling, enameled zelliges, and carved plaster. The chamber is square, measuring 10 meters per side and rising 12 meters high. A slightly smaller square is formed within the chamber by the twelve columns of Carrara marble symmetrically arranged in groups of three around the center of the room.

Chamber of the Three Niches

The chamber or hall of the three niches contains the tombs of Saadi princes and their wives and is richly decorated with mosaics and stucco. The chamber is accessed from the Chamber of the Twelve Columns via two side openings in the northern wall of the latter.

The smaller mausoleum lies at the center of the site. It was built with its northern side against the wall of the mosque and is where you’ll find the graves of several close family members and confidants of the Saadian rulers. the Lalla Masuda Qubba is the oldest part of the complex. The original Saadian tomb, was built to house the tomb of Mohammed el-Sheikh, the dynasty’s founder. It was his son Ahmed el-Mansour who commissioned the mausoleum. Ahmed later had his mum, Lalla Masuda, buried here too, and the building is called the Lalla Masuda Qubba after her.

The Chamber of Lalla Mas’uda

The central chamber. It is believed to be the oldest structure in the necropolis, a relatively small mausoleum erected by the Saadian Sultan Moulay Abdallah between 1557 and 1574 over the tomb of his father, Muhammad al-Sheikh, the founder of the dynasty. Today it contains the tomb of Muhammad al-Sheikh, Lalla Mas’uda (a concubine of al-Sheikh and mother of Ahmad al-Mansur), Moulay Abdallah himself, and possibly also Sultan Abd al-Malik (another son of al-Sheikh who ruled between 1576 and 1578).

Lalla Masu’da’s chamber connects to the large rectangular chamber to the south through a doorway crowned by an intricate stucco arch, The chamber is covered by a berchla roof (a Moroccan wooden framework ceiling with particular stylistic geometric arrangements) with remnants of its former colors.

On either side of the mausoleum are small rectangular chambers (4 by 2 meters) that opens to the outside through richly-decorated loggias. The eastern loggia room has doorways opening onto both the central mausoleum chamber (via another intricate archway) and the southern Grand Chamber, while the western loggia connects only to the southern chamber.