The finance to build the Badii palace came from the Portuguese, following their defeat at the Battle of Alcacer Quibir, known also as the battle of the three kings in northern Morocco. This battle was of great importance both to Moroccan history, as well as to Portuguese. The 3 kings in the battle were King Sebastian of Portugal, the ruling sultan of Morocco, Abd el-Malik, and the deposed sultan, Muhammad. The three Kings were killed that day.

the Battle of the Three Kings was one of the largest wars that marked the history of both Morocco and Portugal. The battle that was also known as «Oued Al Makhazine», and which lasted according to historians for approximately six hours, was the deadliest of them all. 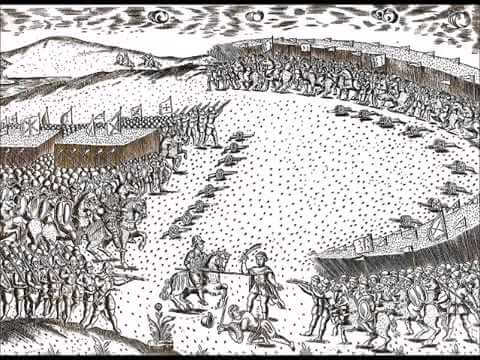 War of the three kings by Par Georges Jansoone

The construction of the palace took place from 1578 to 1594, but some work continued until 1603, the date of the sultan’s death, and was a  celebration of his victory at the Battle of Three Kings.  the palace once had three hundred and sixty rooms and was decorated in Sudanese gold, ivory, Italian marble, semi-precious stones, and cedarwood.

When constructions of the magnificent palace were finally completed, Sultan Ahmed el Mansour held a grand opening ceremony to which he invited Prominent leaders from around Morocco, as well as a number of major European dignitaries.

When the sultan asked the court jester on his thought of the palace, he replied “Sidi, this will make a magnificent ruin”.

Unlike the Bahia Palace in Marrakech, which has remained almost intact, the El Badi Palace now stands in ruins. Where once the floors were tiled with crystal, gold, and turquoise, now it is bare. After his death by the plague disease In 1603, Sultan El Mansour left His sons proclaimed sultans, one in Fez, the other in Marrakech. The result was a territorial dismemberment leading to hatred, terror, and civil wars for 60 years.

The country’s fragmentation is further increased when Muhammad I seizes power in Tafilalt, in the central-eastern region of the country. He is regarded as the founder of the Alawi dynasty. Completing a process begun by his father, Mulay Al-Rashid, the second sultan of the Alawi, united the country under a single ruler in 1666-1670 and ended any opposition, In 1672, King Moulay Ismaël exercised absolute power while continuing the work accomplished by his predecessors. Sultan Moulay Ismail decides t0 transfer the capital from Marrakech to Meknes, and spent over ten years of systematic work to strip the Badii palace of everything valuable, to be used for his own magnificent palace and other grand buildings in the new capital Meknes. even though he did not dare to destroy the graves of the Saadian tombs where Sultan Ahmed El Mansur El Dahahbi was buried.

The Palace Today, The Ruins of an ancient wonder

El Badii palace today might disappoint you if you expect it to be a magnificent residence with costly marble pillars, stuccoworks, and mosaics, like the other great historical buildings in Marrakech such as the Saadian tombs, Bahia Palace, and Madrassa Ben Youssef. Its ruins are a cruel reminder of the destruction of war, and while walking through the ruins you can still be able to get a sense of how magnificent the palace used to be. 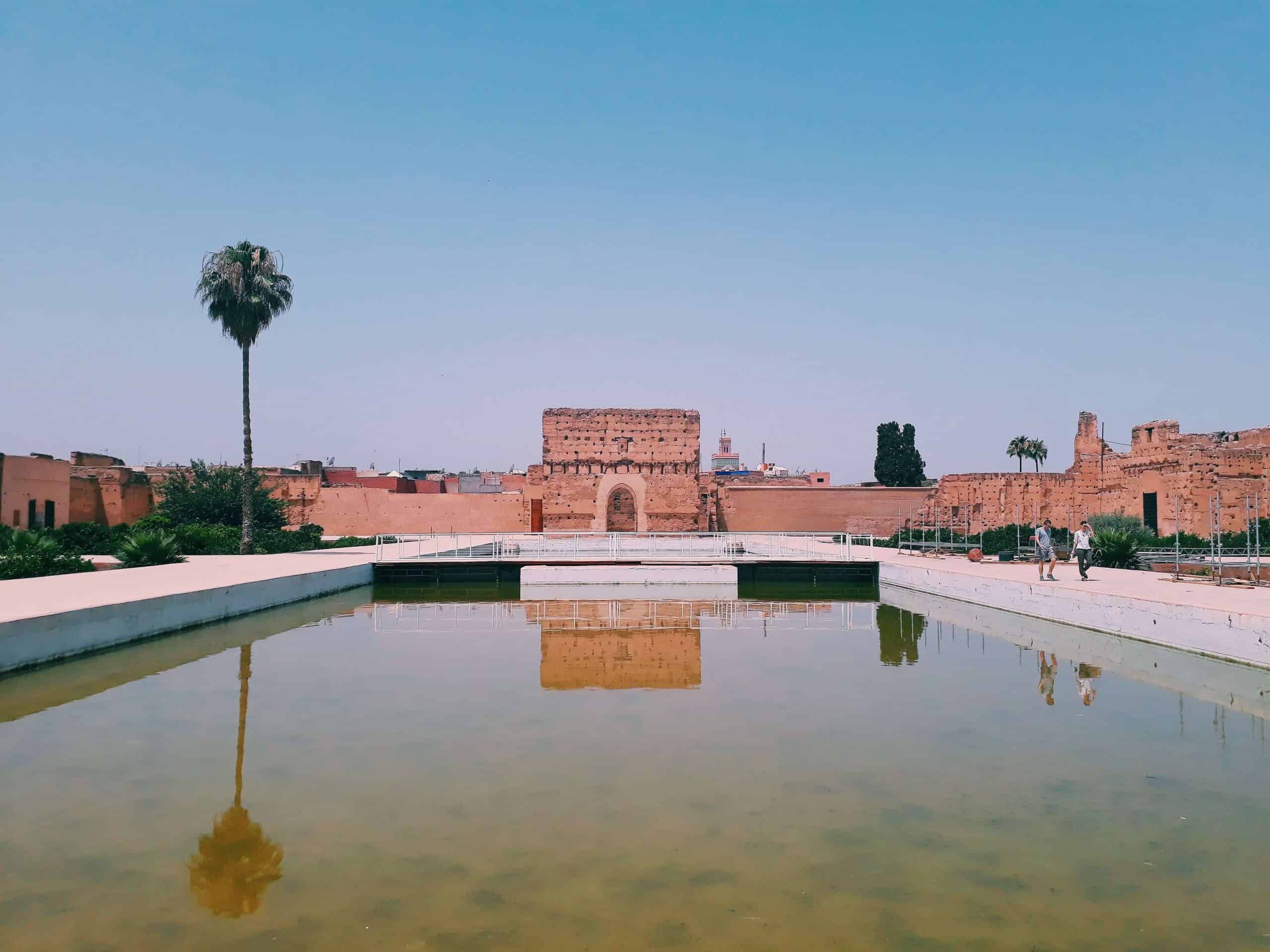 through the Green Pavilion, emerging into a vast central court, over 130m long and nearly as wide. In its northeast corner, you can climb up to get an overview from the ramparts, and a closer view of the storks that nest atop them.

inside the central court, there are four sunken gardens, two on the northern side, and two on the southern side. Pools separate the two gardens on each side, and there are four smaller pools in the four corners of the court, which is constructed on a substructure of vaults in order to allow the circulation of water through the pools and gardens. 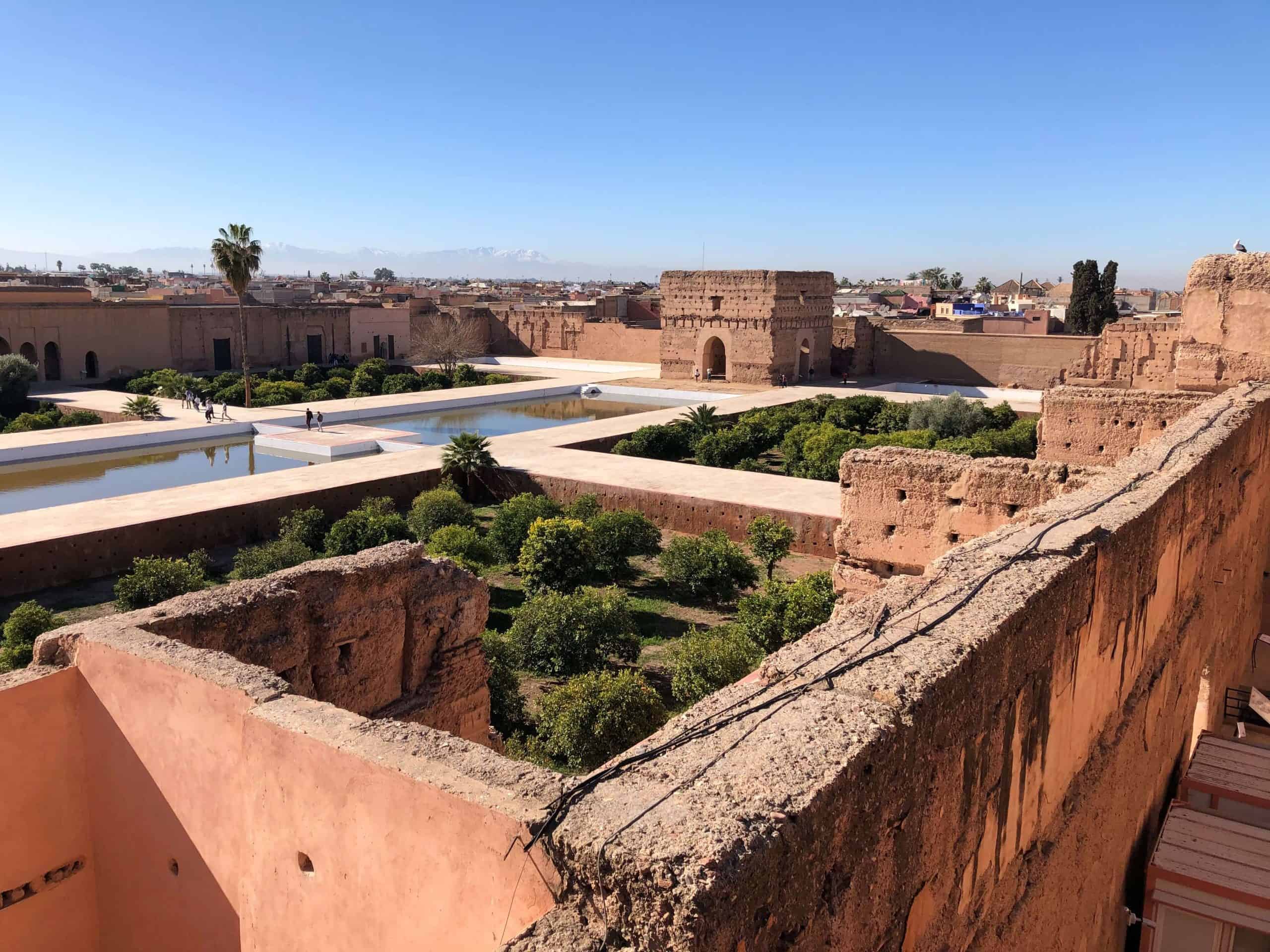 Sultan’s Private Residence, a private accommodation by the sultan the southern façade of the palace, along with the current royal palace.

a minbar is roughly the Islamic equivalent to a pulpit, the steps an Imam ascends during midday Friday prayers. It follows the form of the stairs used by the ProphetMohammed to address the faithful in Mecca and still remains an essential part of mosque architecture today.

On display in the El Badii Palace, the minbar (pulpit) from the Koutoubia Mosque was made in Cordoba, a center of Andalusian arts and letters, in the 12C and transported piece by piece to Marrakech. One of the most accomplished works ever created by Islamic craftsmen, It is composed of a thousand pieces carved in cedar wood with silver inlays and decorated with ebony and sandalwood inlays.

It was so prized, in fact, that when the Almohads conquered Marrakesh in 1147 and destroyed ‘All’s mosque, they preserved the minbar to install it in their newly built Koutoubia Mosque, where it remained until it was removed for restoration in 1962, and eventually brought to the palace. 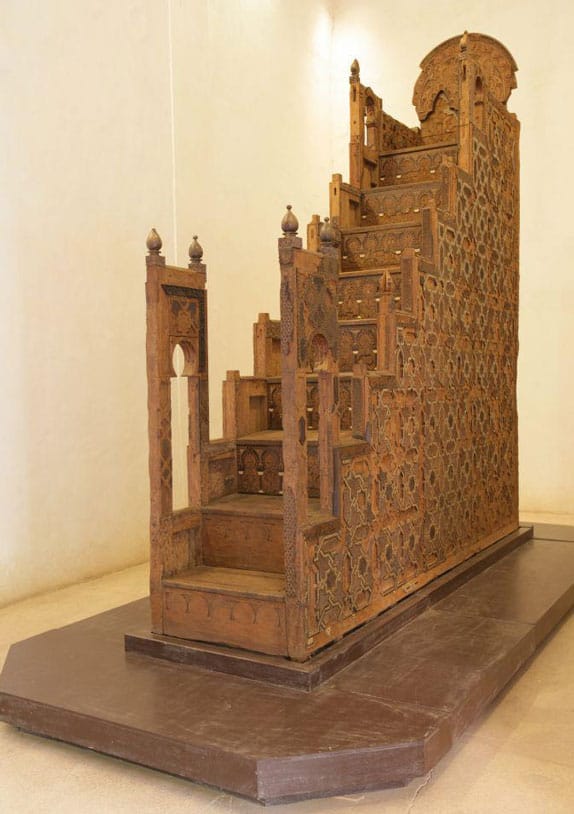 The White Storks took the Gigantic clay walls that separate El  Badi Palace from the rest of the city as their home with many of the oversized nests now occupied with eggs or young, there is much early morning activity, with pairs of birds noisily bill-clattering. The white storks became the symbol of el Badii palace and a great opportunity for photography lovers. 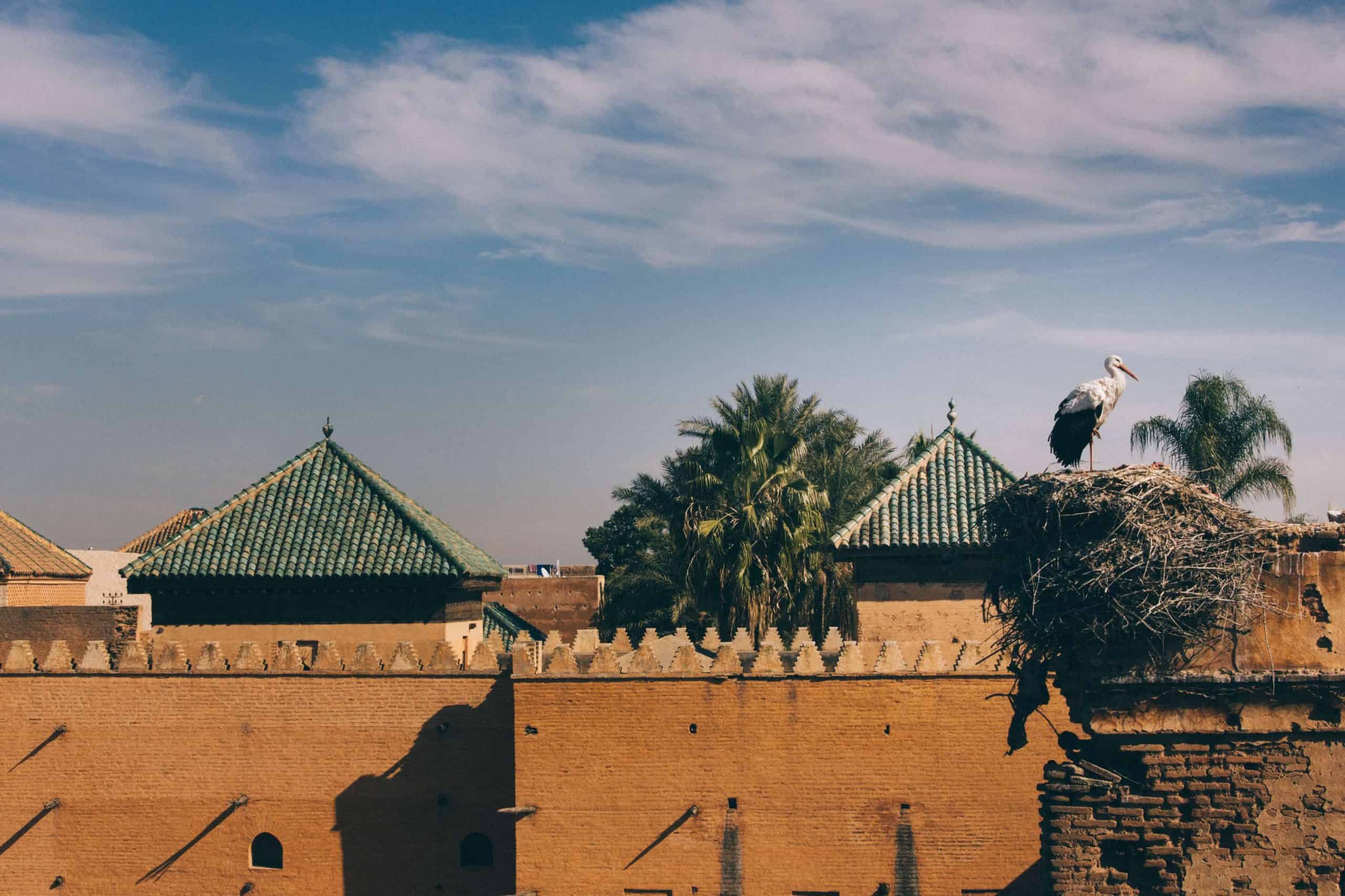 Thanks to archaeological research by the School of Arabic Studies  (EEA Escuela de Estudios Árabes) by M. © González and L. Berenguel with decoration hypotheses by ©Antonio Almagro, using the new computer technologies, virtual 3D models of El Badi Palace, we can now have an idea of how the palace looked like before the destructions. 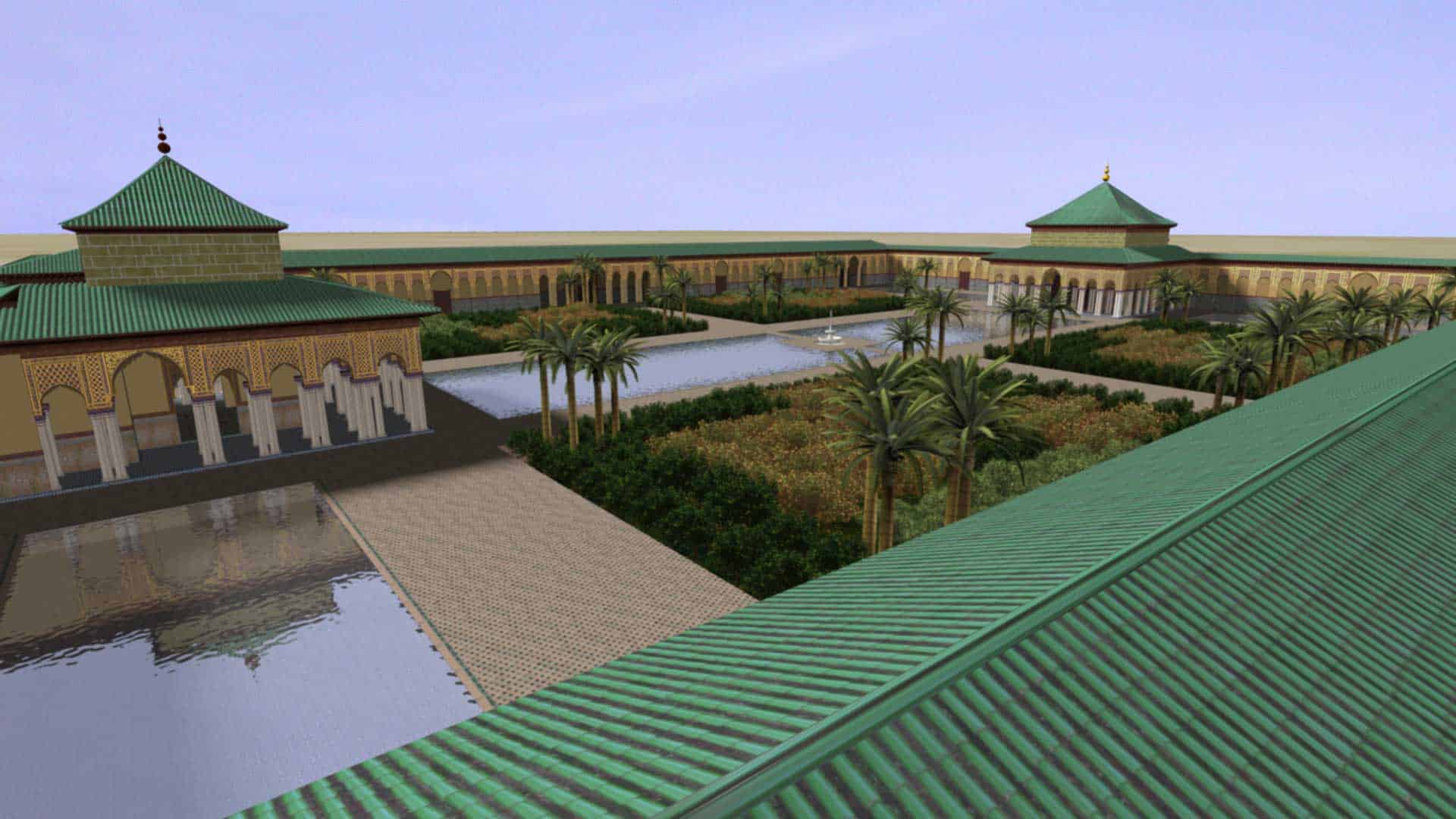 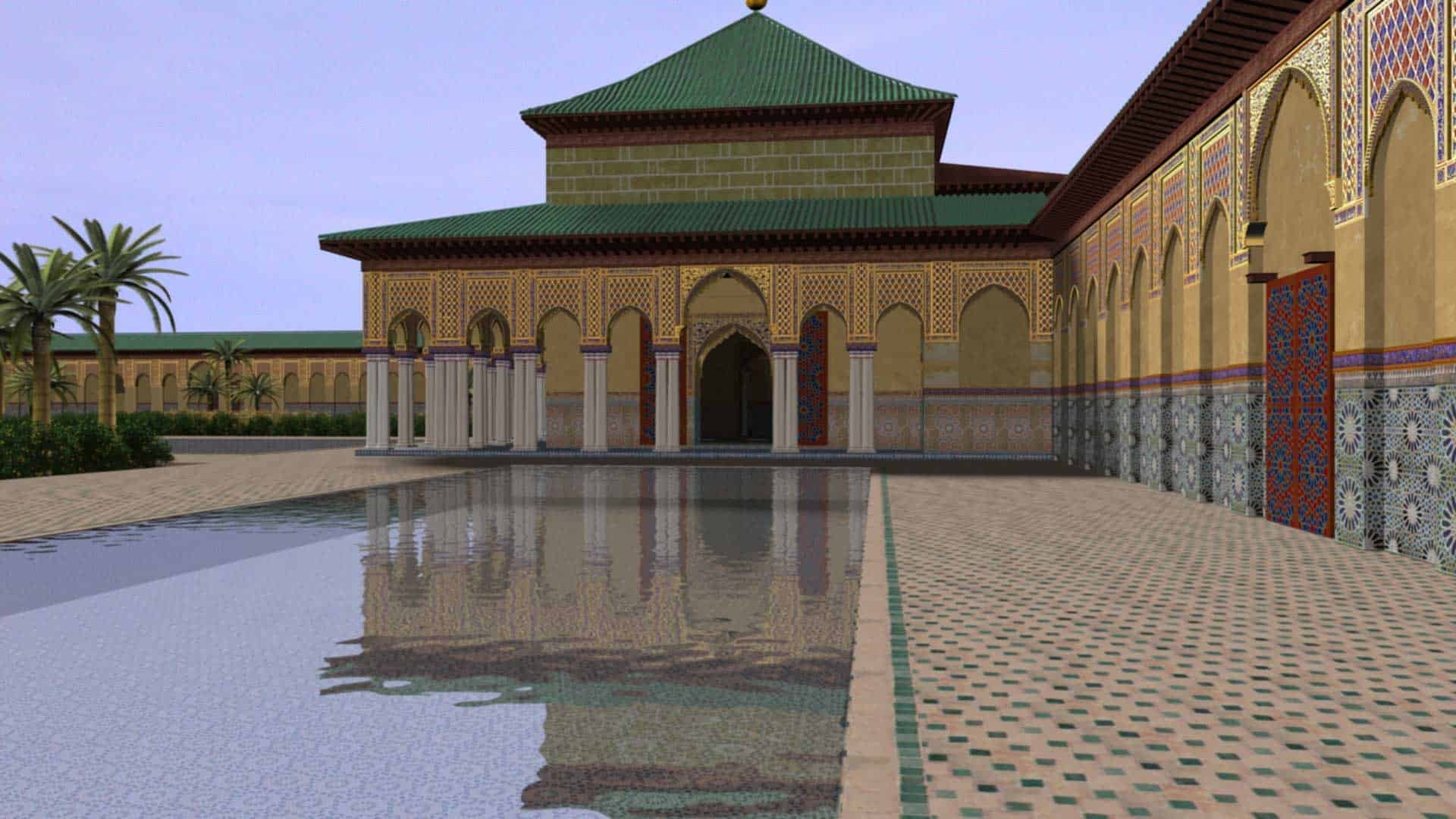 During Hillary Clinton’s visit to Morocco when she was the first lady of the United States, she used Palais Al Badia as the venue for an inspiring speech on tolerance to an audience of 2000 invited guests. This majestic vestige hosts many famous events every year, the Popular Arts Festival, and the French-speaking Marrakech du Rire Festival by Jamal Debbouz. In 2019, the site was used as the setting for a fashion show by the famous Christian Dior fashion house in Paris for its 2020 cruise collection. 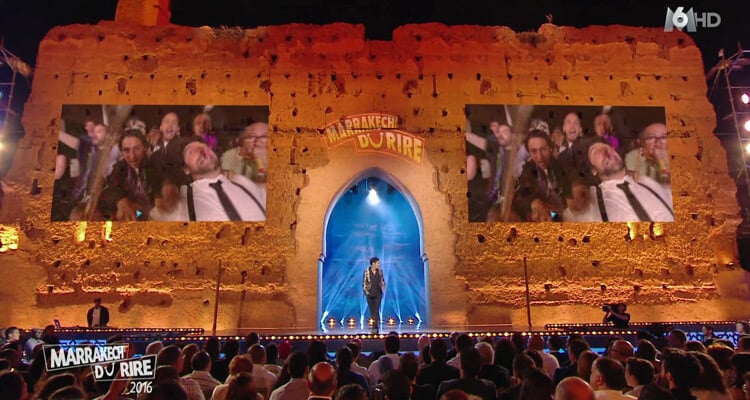