The Oldest City In Morocco, Fez

Fez is the oldest imperial city in Morocco with its medina as a UNESCO World Heritage site, it is a northeastern Moroccan city around 530 Km far from Marrakech, it is the spiritual capital of Morocco and one of the most authentic cities in Morocco. 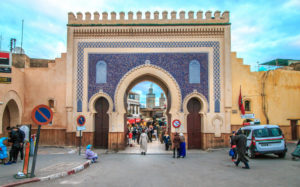 History of Fez the oldest city in Morocco

The city was founded in 789 by IdrissI, Sultan of the first Muslim dynasty the Idrissids on the right bank of Wadi Fez, the current location of the Andalous district. In the 9th century the city welcomed Arab refugees expelled from  Córdoba and settled on the east bank, and a few years later, families who had left Kairouan (Qayrawan) in modern-day Tunisia settled on the west side. In this same period, al quaraouiyine university was built one of the largest and oldest in the world.

By the 11th century, the city had a universal population of more than 500,000 inhabitants, including Berbers, Jews, Moors, Turks, and Christians.  in 1070 The Almoravids united the two separate settlements in a one and gained a reputation for intellectual influence, as a crossroads of culture between Spain and Senega city

in 1269 Fez became the new capital of the  merenids dynasty At that time, a new city, Fez el Jadid, is created on the surrounding heights to accommodate the Caliph, his court and his army, and many great buildings and monuments were built with a unique Arab and Andalusian style. and the city becomes again a double town,

In 1548 the Saadians captured the old medina, Marrakesh was made into the new capital. But, Fez Medina became the capital again with the rise of the Ottoman Empire, ruled by under Suleyman.

In the eighteenth century, thanks to the leaders of the old Qaraouiyne University, the seat of a real political force. Competed by the nascent economic activity of Casablanca, Fez maintains its religious, intellectual and commercial influence.

In 1912, the French impose the Protectorate of Morocco. The Ville Nouvelle (New Town) was established with its wide avenues and residential areas. It definitely loses its position as administrative and economic capital in favor of Rabat and Casablanca, but without giving up its status as the spiritual capital of the country.

Places to visit in Fez Guide

the al-Attarine Madrasa was built in the 14th  century in the heart of the medina, “the madrassa” means (religious schools) which were used primarily for the promotion of Sunni teachings during the reign of  the Marinid dynasty. Al-Attarine Madrasa took its name from the Souk al-Attarine, the spice and perfume market. 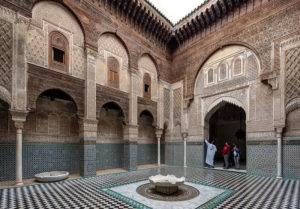 Built between 1350 and 1358, by the sultan  Merenid Abou Inan , a splendid masterpiece and one of the most beautiful Merenid monuments.Unlike other medresas, Bou Inania   functioned as both an educational college and a mosque, (For this reason, it’s closed to visitors during prayer times.)

Also known as “The Blue Gate of Fes.” One of the most important  places to visit when you are in Fez, this famous medina entrance  is a recent monument built in 1913, the original gate was founded in the 12th century deliberately on a slant to block ram herds from entering.

A visit to Fez is incomplete without experiencing the sights and smells of a tannery, One of the most iconic spots  in the city and best-known is Chouara tannery Located on the eastern edge of the medina; Fes el-Bali, At The tanneries  all is done manually without the need for modern machinery, transforming the hides of cows, sheep, goats and camels, into high quality leather products such as bags, coats, shoes, and slippers. 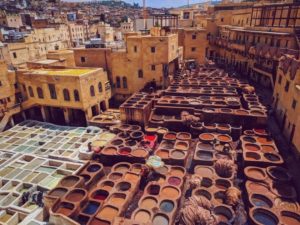 The al-Qarawiyyin mosque, a religious school / college was founded in 859 by Fatima al-Fihri, a member of an elite family who emigrated from the Tunisian city of Kairouan. It is now the spiritual heart of fez and one of the oldest universities in the world. Admire the institution’s simple yet beautiful design, decorated with Andalusian art bordered with Kufic calligraphy. 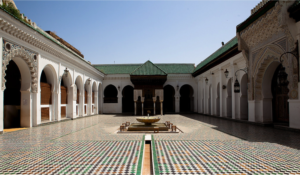 The famous seven golden doors of the royal palace of fescan only leave you imagining how beautiful it is from inside  unfortunately, is not open to the public, but the outside is still worth a visit. founded  in the 1960s, in in the heart of Fes El Jadid, district adjacent to the Old City. 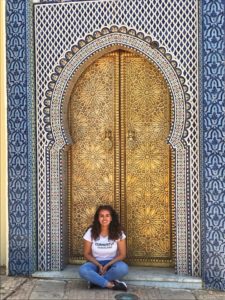 The building was built in the 17th century named after Aben Danan, a member of a prestigious family. It is One of the oldest and most important synagogues in North Africa and  one of the finest buildings in the Jewish culture and occupies a special place in Moroccan Judaism. the synagogue was renovated in 1999, is still used on high holy days. 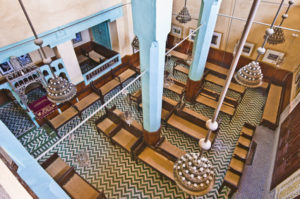 built in 1582 at the sultan of Saadian Sultan Ahmed El Mansour Eddahbi. it’s a long way from the medina (there’s no direct walking path) It is perfect for a commanding view across the Medina with the best panorama of The Oldest City In Morocco Fez. 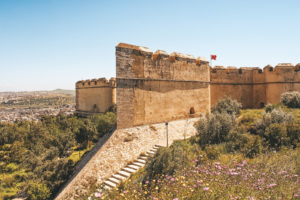 Read More here Things To Do In Fez

Women Best Travel is a female-owned company that specializes in Morocco travel, we Arrange for you to Discover “exclusive and personal” experiences. You’ll see what the regular bus Group tours don’t show and what the tour agents may not know about, taking you beyond the standard tours. we combine Culture, History, Berber Culture, architecture, history, and storytelling in one powerful experience of Morocco that no other tour company can match.

Tours from Fez and Marrakech

The Oldest City In Morocco Fez

DAY 1: FES – MIDELT – ZIZ VALLEY – ERFOUD – MERZOUGA 450 KM
the tour start early in the morning around 8 am your guide picks you up from your Riad/Hotel and starts a long driving day across the high atlas mountains leaving the old city of fez In the way we will pass through the most modern and clean city in the country Ifran. This Berber name of Ifran means caves and it is nicknamed in Morocco as a little Switzerland since it is a very green town and is a ski resort in the Middle Atlas region of Morocco because of its high altitude at 1665 meters. After we will stop in ziz valley To the south, the valley presents a spectacular sight: a dense canopy of palms wedged between ancient striated cliffs, which date to the Jurassic period. We will encounter the Oued (River) ziz, its source is located in the middle atlas region and continues all the way to the Sahara to reach Algeria, alongside the river is surrounded by a stunning 125km belt of green palmeries.
We arrive at Erfoud the capital of Fossils in Morocco It was built by the French in the 1930s as an administrative center. It is a quiet place characterized by its red buildings and gorgeous scenery. well known for its wood-fired madfouna (Berber ‘pizza’), during our stop, you will have the chance to visit one of the factories where they make beautiful articles out of marble, right after we will drive to Erg Chebbi, time for a cup of tea and packing for desert camp. Meet up with Camels for camel-ride and head to the dunes to watch the sunset. Overnight in the Berber tent in the middle of the most spectacular dunes of morocco, Highest dunes, spend 1 night the friendly Berbers enjoy their music, dance around the fire… dinner in the camp.

DAY 2: MERZOUGA – ERG CHEBBI DUNES SAHARA DESERT – 30km
A pure Sahara desert exploration on 4X4 ride and camel trekking to the high dunes of erg Chebbi, the highest dunes in Morocco. make the most of this travel experience by visiting a nomadic family and the small sharing towns near the desert camps in el khamlia Also known as the “Black village” that is distinguished by its residents, who reflect a strong history of ritual spirituality like music, dancing, and healing, its population is also called Gnawa, descendants of black African slaves. The Gnawa will let you share their Saharan music, accompanied by drums, guembris and qaraqebs, with a few dancing steps in their company.
DAY 3: MERZOUGA – TODRA GORGE – DADES GORGE
your guide will wake you up to witness the most magical sunrise from the highest golden dunes, chance to see some wildlife. Time for breakfast and shower, last chance to enjoy the dunes, we set off to Rissani where we will visit the mausoleum of Moulay Ali Chrif the founder of the actual Alaouite dynasty of Morocco at 17th century. Then we drive to the most spectacular gorge of Morocco, Todra gorge, enjoy a walk with your guide to explore the irrigation system and traditional farming gardens, a visit to a berber family to learn about carpet, recommended, to knock your socks off, after the berber family co-operative, showing their goods and carepets, great place to shop from mohamed’s family ( situated in the other side of the river near the mosque ) great place to buy genuine berber carpets and souvenirs, then you walk to the gorge, drive back to your hotel in the Tinghir

DAY 4: DADES VALLEY – OUARZAZATE – AIT BENHADDOU – MARRAKECH
Ait Benhaddou Kasbah has been a UNESCO World Heritage Site since 1987, this Unesco-protected red mudbrick ksar (fortified village) built in the 11th century and used to be a strategic stop for caravans of camels, often numbering hundreds, on the trans-Saharan trade route from Sudan to Marrakech carrying gold, silver, and slaves and returning with salt, Afterword we will head to Marrakech via the tizin’tichka pass .we’ll stop to visit the town of Telouet and its ancient 17th century Kasbah then we’ll continue exploring the tIzin’tichka road especially its great landscape of Berber’s villages, then we head north to Ouarzazate after crossing the Anti-Atlas Mountains, continue to Marrakech by Tizi n Tichka pass. Overnight in Marrakech after a long day drive.

The Oldest City In Morocco Fez